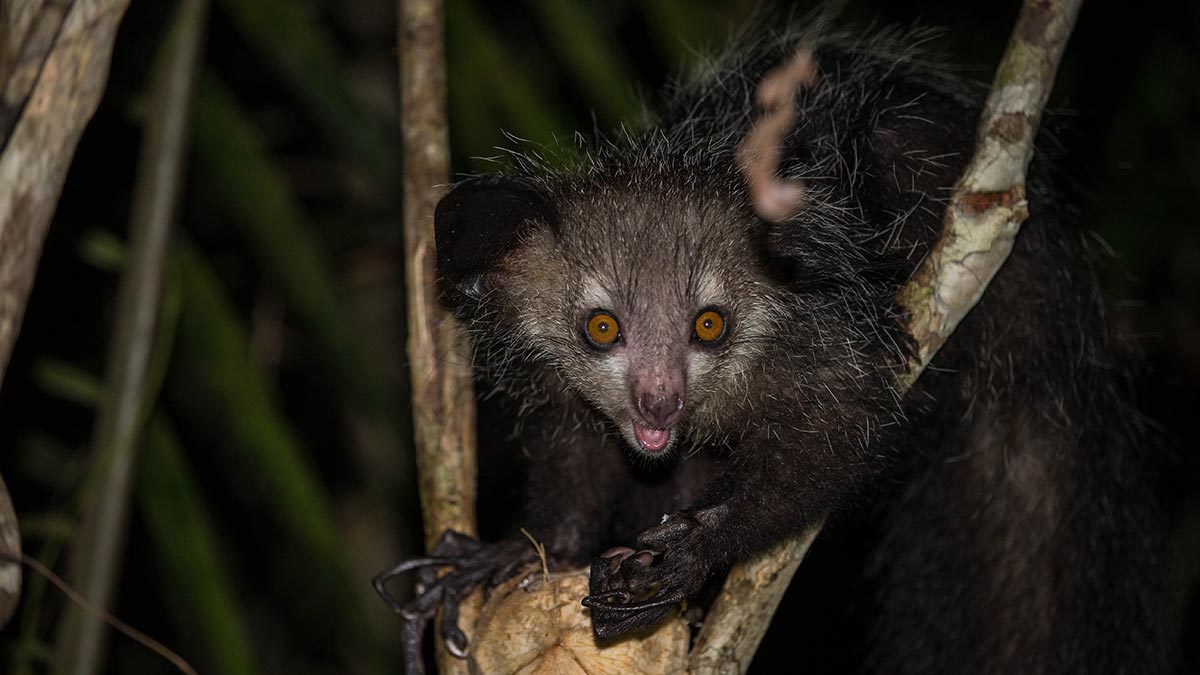 Pronounced ‘eye eye’, Aye ayes come from the lemur family and are found on a small island off of Africa’s southeastern coast.

These little babies are native to Madagascar!

Woah! What is that wide-eyed critter looking at you? Well, if you travel to Madagascar you just might see one of these. He is an aye aye (pronounced eye eye), and he is only found on a small island off of Africa’s southeastern coast. Aye aye come from the lemur family, and baby aye ayes are known as “infants”, just like you!

They are nocturnal, which you can tell by those big eyes! He needs those eyes so he can be active in the dark and sleep during the day. Just the same with the adult aye aye, baby aye aye’s appearance is somewhat weird. They are born with popping eyes, over-sized sensitive ears, and over-sized bushy tails. Let’s not forget that middle finger – it looks like a skeleton’s finger! Aye ayes use this strange finger to “fish” out grubs from trees.

As they grow to reach their maturity, their coat turns dark brown, coarse, and shaggy. Even when they are babies, aye aye have pointed claws on their fingers and toes. Not only are their toes big, they are also opposable as well, which enables them to hang from branches. They seem strange to us, but they are perfectly adapted to life in some of the tallest trees of Madagascar’s rainforest.

Being nocturnal animals, they prefer to hide in specially built nests during the day. Their nests are made from leaves and branches. They are very complex, with a single hole for an entrance. The nest is spherical in shape and keeps them safe during the day. Aye ayes are active during night and take advantage of the forest ground when night falls.

Baby aye aye are taught by their parents how to hunt. They use their middle finger, which is extremely bony and thin. It serves as their main sensory organ. They feed from the wood, boring out insect larvae as well as grubs. They are adept at sensing the movement of these insects. With the help of their fourth finger, they snatch out the insects. They also use their fingers in scooping the flesh from coconut and other fruits. Works better than a spoon don’t you think?