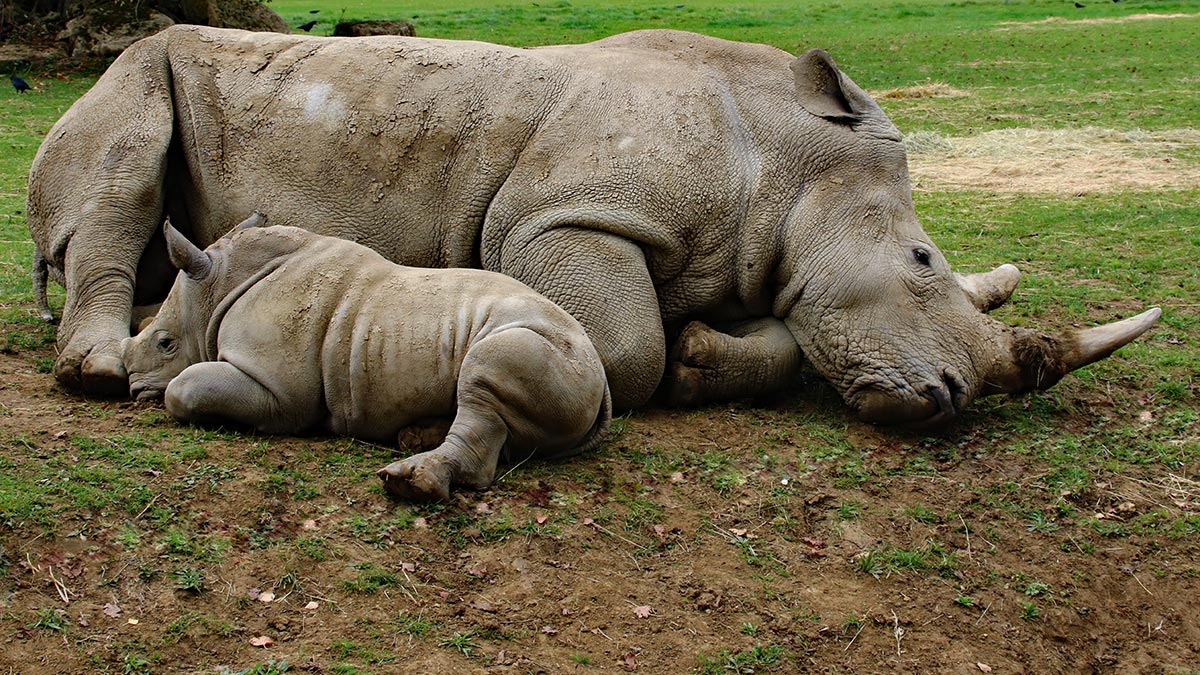 Rhinos live in Africa and South Asia and include several kinds of rhinos, like black, white, Indian, Sumatran and Javan.

Oh he may be small now, but he’ll grow to be the second biggest animal on earth! He is a rhino, short for rhinoceros. Rhinos come from the family Rhinocerotidae, try saying that five times fast!

Rhinos live in Africa and South Asia. There are several kinds of rhinos, like black, white, Indian, Sumatran and Javan. Unfortunately, rhinos are endangered and recently, the species of Western black rhinos was officially declared extinct. All surviving rhinos need our help, so these majestic creatures can survive for generations to come.

Rhinos live a relatively peaceful life. After 18 months in its mother’s stomach, the rhino baby is ready to come out. When it is time for the babies to be born, their mothers are vulnerable so they stay near water. When the babies, called calves, are born, they form an immediate bond with their mother. The baby mimics its mother. It follows her in almost every move. Rhinos see better at a distance, and over time they become very curious about their surroundings.

These little babies look like their mother mostly. One difference is they do not have a horn. When they are born they weigh about 60 to 120 pounds. Their skin is usually gray, but may vary depending on the soil conditions where they graze. The skin is wrinkled and devoid of hair. In some parts of their body, the skin can be one and a half inches thick. Under the skin, they have one or two inches body fat that helps them to regulate their body temperature.

Depending of the specific species, the babies have lips and teeth that are adapted to break down vegetation. When the baby rhino is of the white species, it has wide, square lips. Some other kinds eat with prehensile upper lips. That means they can grasp things with it, like you do with your hands!

Rhinos are plant eaters. When the babies are little, they drink milk from their mother. This usually lasts until they are 18 months. But in the meantime they start eating plants.
When they have young, mothers are very protective. It is in their nature to be aggressive. They will do anything to protect their babies from predators, mostly lions and spotted hyenas. They use their massive size and strength as a defensive mechanism. Who would want to mess with a mama who weighs almost a ton?

The rhino babies are considered grown when they are five to seven years, for females, and seven to ten years, for males. Until then, they live protected by their mothers.