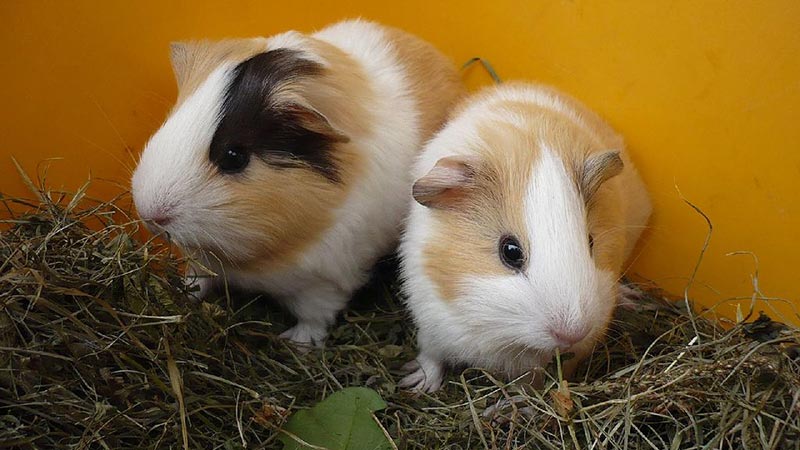 Guinea pigs are domestic rodents that many people enjoy raising at home.

Guinea pigs are domestic rodents that many people enjoy raising at home. They have a very cute look and can show feelings to humans! Guinea pig babies are called pups. The female guinea pig is called sow and male one is called boar. The sow gives birth to baby guinea pigs after 2 months of pregnancy.

Once it gives birth, you’ll notice that the pups are born with their eyes open, teeth, claws and a coat of fur! These babies can stand right away after birth. Typically a young guinea pig weighs about 100 grams. The mother nurses the pups so they grow big and strong over the next 3-6 weeks. After this period they’ll be introduced to grass and dry food including alfalfa hay. They like to play with each other and run around but most of the time they play around the mother.

The pups should not be separated from the sow before they become at least 3 weeks old. After 3 weeks, they can be separated from the mother and brought to good, loving forever homes. The female pups can stay with mother for its life or it can be introduced to other females. It’s preferred to be a small group so it can take to them quickly.

Guinea pigs are fun to watch! They like to beg for food and play. You’ll even hear them make little squeaking noises!

Try to house your guinea pig in the largest cage possible. The bigger the better! The rule of thumb is at least 4×4 feet for a single pig. Stay away from glass aquariums as they don’t provide the best ventilation for your pet. Never keep your guinea pig outside; they prefer an indoor home with a stable temperature between 60 and 80 degrees. Whether they’re playing or trying to sleep, a baby guinea pig loves to escape out of the limelight and hide away in their own little spot. Having a hideaway will make them more comfortable!

Your guinea pig should eat mostly pet store bagged food that’s formulated just for them. This food will have almost everything they need to live healthily. Supplement that food with special treats such as strawberries or some veggies! They’ll want to be your best friend! Always ensure they have fresh water.